Opening to a Film
Film – 2001: A Space Odyssey
The opening to 2001: A Space Odyssey is generally seen as one of the most memorable and famous film openings of all time, and is seen as Stanley Kubrick’s Magnum Opus film. The film starts with a shot of a planet with the sun coming up from behind it, this lasts about a minute long, with the use of the famous orchestra score “Also sprach Zarathustra” by Richard Strauss. This is also where the credits of the film appear as well. It is good as it is all in one shot, and as the sun appears very slowly it builds lots of suspense, the music helps with as well.

The film then goes to a number of long shots of desert scenery (with the words “The Dawn of Man” appearing), showing the world without human life, complete nothingness. Then it cuts to a load of monkeys and pig-like animals sitting around and scavenging for food. While drinking at a waterhole, another group of monkeys appear and threaten and scare them, causing them to run away and the other group to take the waterhole. All of these shots either long shots or medium shots and another else really appears, also the editing it very simple as well. This may have been done to show the simplicity of the monkeys at this stage, the shots are long and drawn out, showing the slow process of their lives.

Later we see the monkeys in a retreated area sleeping. As they wake up the next morning they see a black Monolith (a solid rectangular structure) and they all are scared at first but then walk around it and begin to touch it. An eerie piece of music is playing during this scene, maybe to confuse us about the black object we are seeing, as us just like the monkeys we are confused about what it is or what it will do, and to gain more suspense from the audience.
There are some more scenery long shots then goes to one of the monkeys picking up some bones. It then slowly waves it back and forth and then starts to beat the ground with it, then finally smashes the other bones including the skull. During this sequence it cuts back and forth to one of the Pig-like creatures falling to the ground (this scene symbolizes the monkey first use of tools and weapons). This scene also contains the famous film score with shows us that this is a very big part and tells us this is the turning point from the monkeys, or The Dawn of Man, it might also contradict this phrase as technically it is the Dawn of Violence.
Straight after we see the monkeys eating the meat from the animals that had killed, already the monkey are evolving.
The next day the monkeys go back to the waterhole with the bone clubs. They go up to the leader of the other tribe and hit it round the head, and lots of monkeys with clubs then join in and kill the leader. The other tribe retreat. Realising victory one of the monkeys throws his bone into the air and as it is spinning around it then cuts to a spaceship that is four million years into the future. This is a match cut/graphic match which shows us how far humans have progressed over time.
I think this is one of the best openings as the whole film is about space travel with vast amounts of stunning technology, and it starts off with the very basics of life, and where humans evolved from. Overall the opening is paced is very slow, which is similar to the whole film, which could mean that life is very slow, but still vast amounts of things happen during it. 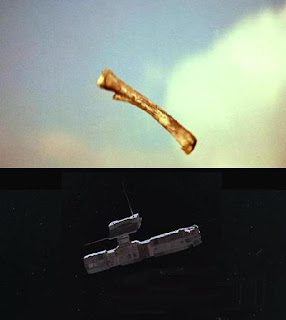 Posted by Joe, Spencer, Hani and Peter at 12:42 No comments:

Ideas on the genre for our production

We decided right to the start that we wouldn't do a horror or a thriller film because we thought it was too cliche and it seemed everyone else was doing it. We thought that sci fi might be a possibility, but then realized that it would take way too much effort and money to buy props, set up settings and make it look vaguely realistic. We decided a western could be a good idea so long as we didn't stick to the typical status quo of gun toting cowboys and bring it up to date. For instance instead of two groups of men facing up to have a duel in some outcast mexican town we could have two rival gangs facing off down a suburban park or public place.
Other ideas were to have an art house / surreal look to the film, eg David Lynch. Or to have a mockumentary, based around somebodies lives. A third idea was to have Phycological Film Noir.
Posted by Joe, Spencer, Hani and Peter at 04:11 No comments: