These were our initial ideas for our rebellious daughter intro pictures, we wanted to show the daughter as the rebellious type, who goes against her fathers orders. These photos would go in conjunction with the audio of the argument between the daughter and father/detective. 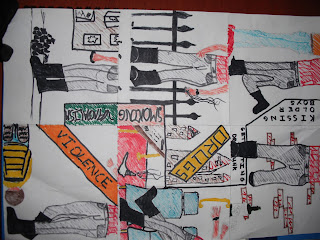 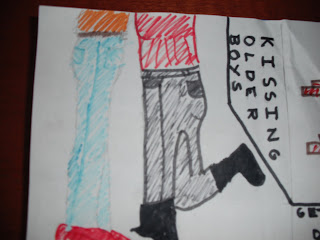 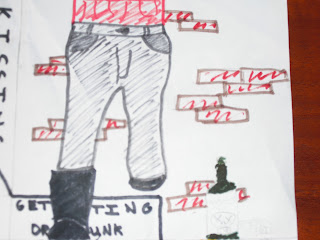 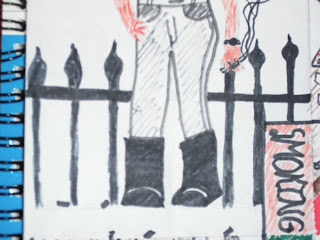 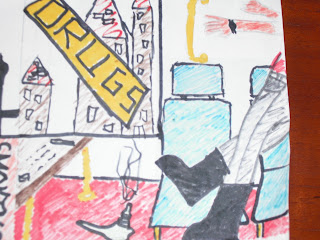 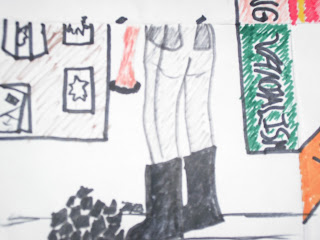 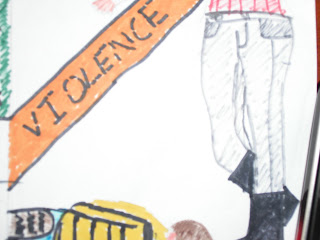 and violence
Illustrated by Joe Lyndon
Posted by Joe, Spencer, Hani and Peter at 06:17 No comments:

During our 3rd and 4th re shoot we were kicked off the NCP and the Sovereign center. As we did not have permission to shoot we were told by the guards we had to leave, causing us not to be able to finish our shooting which led us to a 5th re shoot. This has caused problems like continuity errors such as positioning, lighting and appearance. the shooting also took a while due to many people in the background which also led to background noise which was not needed and led to more reshooting. Also our actors found it hard to work and perform certain tasks, e.g. not being able to fall over correctly on Que, and the fact that they were nervous acting in front of an audience.
Posted by Joe, Spencer, Hani and Peter at 06:18 No comments:

The re-shoot didn't go as planned. There were loads of problems once again although the continuity wasn't the least of problems, mainly because you couldn't see any of it. We went to the NCP to re-shoot everything again but the stairwell lights didn't turn back on ending in VERY dark shots.
Also the sound quality isn't brilliant this time, especially as there was a whole group of people chatting below us.  Finally as we approached the roof of the NCP we were stopped by the security guards there who said we would need filming permission which is something we had no idea we needed and weren't told about before we went out filming. This was a major blow to our plans and instead of filming in the NCP we thought it might be a good idea to re-shoot in a different location, the sovereign centre stairwell which is always lit brightly and was our second location choice anyway Most importantly we don't need permission to film there. Another re-shoot is definitely in order.
Posted by Joe, Spencer, Hani and Peter at 01:50 No comments:

The Rough Cut of Listen To Me!

This is our first draft for our crime thriller opening scene Listen To Me!

At the moment there are many problems with our first draft.
Firstly and most importantly it has been stated by our tester audiences that the two time frames in our film are very hard to separate and it looks as if the detective is chasing the daughter rather than the detective arriving after the crime scene to investigate. To combat this we might have to dismiss our hatred of cliche effects and use a sepia or a desaturation filter effect on the daughter scenes.
To combat misleading the audiences into thinking this is just a father and daughters misunderstanding, we will need to insert a couple of quick shots of her pursuer, but not to give away his identity. It has been understood from most horror and thriller films that by not showing the baddie until later the film is more intense because along with the scares they give the illusion of the unknown which everyone is scared of.
Another thing i found out about our film was that the continuity is not great.
For instance from 1:07 to 1:09 the daughter changes knee on which she falls upon etc.
Another thing is that the acting is not brilliant from the daughter in certain places (losing her shoe) which means that we will have to reshoot, unfortunately to get that scene perfect she will have to change her costume, which in turn forces us to reshoot the whole film. This will also effects our use of props and our detective shots. A definate rethink and shoot needed.
One last thing that is bothering me is that it is hard to recognise that our detective is in fact 'a detective'. This is because rather than putting in our office scene which establishes our detectives character weput our improvised our picture animatic with an audio argument alongside. We may have to completely scrap our animatic and switch it for the unfilmed office scene.
Posted by Joe, Spencer, Hani and Peter at 14:07 No comments:

Email ThisBlogThis!Share to TwitterShare to FacebookShare to Pinterest
Labels: Diary, Information about our film opening, Joe