The Evolution Of Our Ideas

From the offset we decided we wanted and offcentre project that was completely different, as we delved deeper into our project it became clear it would be hard to make every detail different than other films and it was difficult to subvert some genres. This meant that certain themes and representation in our film were fairly stereotypical of similar crime thrillers.
Other things such as filming permission also got in the way of our filming and stunted how much creativity we had with our  project. For instance our first ideas for the setting for our crime thriller was in an unpopular car park in the middle of Weston, a certainty for damp, dingy and decrepped; exactly the three qualities we were looking for in a setting. The only problem was that this car  park in particular wasnt public property and needed filming permission slip so that we cold film there. We were ill informed of this and decided to film as and when we could to put our project together. This was a big mistake and it dawned to us that to make a polished and professional piece of work you need time; time for planning and almost definately time for filming. Not having enough time for either of these led to our fist project which was less than the perfect finished piece. On the first scheduled filming time we left the video camera behind and led us to improvise some still pictures which although greatly improved the audiences understanding of our film wasnt what media is all about and starting a film with pictures of a rebellious daughter made it look like little less than a simplistic animatic. 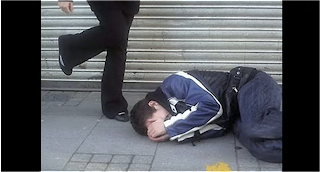 Also this lack of time led to everyones timing schedules overlapping and amaking filming hard as everyone was doing different things at different times meaning we could only film one persons scenes rather than creating a crafted piece.
This problem also led to our group having to do 5 re-takes which put a strain on everyones relationships and it looked as if the project would have never have been finished, but with a few minor adjustments and opinions being taken on board from actors we managed to film everything we needed to. The only problem was the continuity, mise en scene, lighting, the environment itself and the fact that with the new ideas on board our project had lost its creative flair and was looking less independant and ou there, these made problems for me (Joe), the editor. Its hard to make two clips look like a smooth piece when they are in two different lights, two different times of day, with actors in two different sets of clothes and the wind muffling dialogue. This was absolute hell for me. This prompted another re-shoot in which we started everything again. One of the best decisions made over the course of this project by far!
In this new re-shoot we kept the same plot apart from a couple of alterations such as the removal of Sophie (the daughter) falling over which had creating intense problems for me before. Instead we introduced the losing of a piece of clothing; a scarf. Here you can clearly see the continuity error. 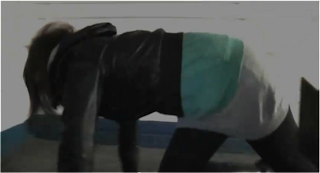 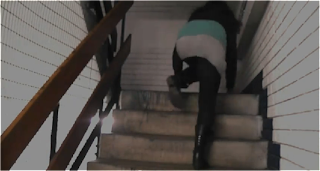 This creating a new project also made us find a new setting as the NCP was an extreme annoyance. We decided upon the Sovereign Centre staircase and although it was much more modern and clean, lots of the elements that had hindered us before were eradicated by this move. The practicality of the staircase was probably the best improvement. Problems with moving could be the loss of some of the connotations of crime thrillers, an unfortunate loss of mood and atmosphere for the audience, but not necessarily a loss in drama. Although we did have to get rid of the clips where the daughter falls over because our project would have looked fake and unproffessional.
In our previous film we were told its plot was a little complicated and the main theme of kidnap was lost. In our new film we introduced a villain; hidden as much as possible from the audience of course, but we put a sin city like filter on the already black and white filter on the daughters chase scenes showing it was in the past and gave emphasis to the kidnapper. Although this effect may have confused the audience rather gaining the desired effect.
Instead what we should have done was to insert a clip of the duaghter (sophie) getting a bag put over her head, a must for any kidnapping story. 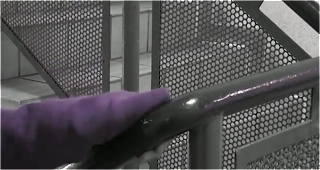