Marketing Strategies by Similar Films In Relation To Ours

Taken was a big budget Hollywood made film. Unsurprisingly Taken managed to distribute very well.
TV: In Britain Taken managed to air an advert on television screens on nearly every channel. If we are going to market our film to the wider audience a television advert is a must. We would need to put our advert at the right time, for instance after the 9.00 watershed to attract older audiences. We could also put our advert after particular programs that predominantly for teenagers. Things such as Heroes or Lost.

RADIO: Taken was also reviewed on some Radio stations. One being the Radio Five Live; an interesting choice considering the audience who listens are mostly older and it has been proved that less older people are going to the cinema than before. The marketing crew behind Taken obviously wanted to reach out to the more risky audiences. 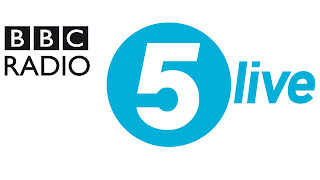 FILM TRAILERS: Many film trailers were introduced before many other 15 age rated action films such as Cloverfield (2008) but unfortunately couldn't be shown before 12 age rated action films which most films were in 2008. I believe Taken had achieved the correct age rating as it is just about passable for a 15 considering it has some very strong violence, drug use and sexual discrimination. It is just unfortunate that the action films introduced in 2008 were mostly 12's, this meant Taken had to rely on other forms of distribution as a form of enlightening and enticing an audience. When we distribute our film it might be wise to consider the age rating of our film. If we can achieve a 12 age rated film then we can screen our film to the wider younger audience, but we will have to cut down some of the harder content; this will unfortunately lose some of the interest to our film. To not achieve a 15 age rating would mean losing one half of our target audience, the 15-17 girls who could relate to the abducted girl in our film. 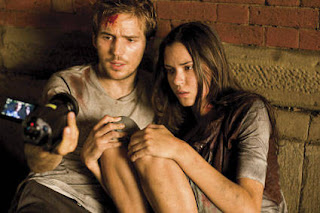 POSTERS: This old fashioned method of communicating with an audience goes way back and is still one of the most competed for ways of distribution and... These posters are such a major part of our life that most of the time we forget they are even there. Film distributers take this as a good thing and that film posters attract audiences by sublimminal messaging. For instance if someone see's enough of one film then that person is going to think that this film is obviously worth watching. This is definately a good idea to distribute our film as it makes our audiences think 'wow, that film is good enough to own a space on a billboard; it must be worth watching'. It makes our film look important although it will be hard to be able to own a billboard space and still achieve some of our other distribution methods.

WEBSITE: Taken has its own website. Another essential distribution method for audience members that would like to interact with the film in question and learn more about it. These sorts of distribution methods are very cheap to set up, enable fans of the film to create their own reviews and user created videos, further spreading the word of the film. I had after some deep searching found Taken's own website which was full of extra content. It was interesting how this website was multilingual. This would have been made like this to encorperate Taken's french audience. They have a french audience as parts of the film was filmed in France in which the french audience could relate. This is a definate approved form of distribution for our film as it allows fans and interested audiences alike to get more info about our film for a cheap price. 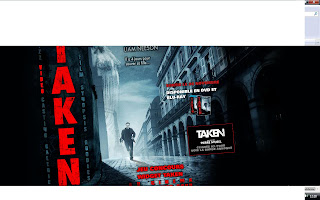