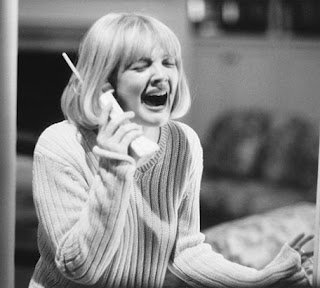 Who could forget the iconic opening scene of scream where ghost face is on the phone to a female character asking her if she wants to play a game , a game which if answered wrong could mean death. The scene starts with non diogetic screaming which is represnative of what film is most likely to be about and as this happens we see the title of the film Scream as the screaming starts to come to an end we hear the transition from screaming to the sound of a phone ringing.
in the opening scene there is not much sound which may add to the tension as to what we as the viewer is expecting to happen, the only real sounds that we hear are the diogetic phone being rung and the popcorn popping. Popcorn is usually associated with films which also may suggest what this film is about, the viewer discovers this more as the female character played by Drew Barrymore and the man on the fun start to discuss classic horror films which shows what Scream is about, by playing on the rules of a horror film, films that are quoted are Halloween and A Nightmare on Elm Street.
In itself this film opening could be seen as its own simple horror film as it has all the traits of one it also shows a hidden meaning, which is that what will the youths of today do when they are exposed to the amount of horror films that are out there, scream is a perfect example of this as the killer is a human being not some unforeseen force such as Paranormal activities which would also mean that this could happen and example of a film which follows the concept of the killers only being human would be the British film Eden Lake. 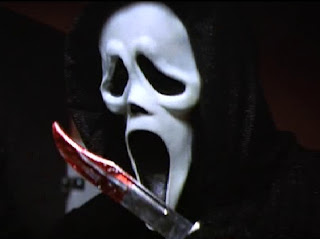 another aspect of the film would be the fact that you don't really know the people around you and what they could be capable of, for example in this opening sequence the person on the phone is watching Drew Barrymore.
an interesting thing about the opening to Scream is that the picture is not required to understand what is going on in the film as its mainly just dialogue, also when there is a shot of outside you can hear birds noises and the fact that there is nothing outside that we can really see, anything living anyway this then would represent that the female character is isolated, also this is stated by the man on the phone when he says 'the police would be to late as we are in the middle of nowhere ` so as i said before you can understand what is happening without the picture, we know the female character is scared as we can hear her crying and screaming 'leave me alone`
Posted by Joe, Spencer, Hani and Peter at 12:42