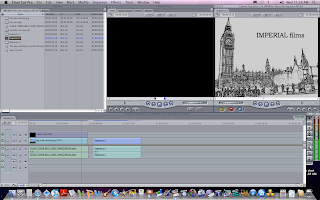 Our first ideas for our smaller production title sequence started off as having an angry animal appear. We though having an animal from the feline family, we thought the eyes would give a cool glare effect if we faded them in from black.  In the end we decided the simplest feline fiend, was the cat so we could use their small creepy eyes while including an angry meow, but when looking at the different sounds we could use from Soundtrack Pro, we found there were none, expect for a tiger roar, which fitted aptly. We looked at different names for this, pitching different ideas from, angry cat productions, feral cat productions, wild cat productions, but as the angry cat meow sound from Soundtrack Pro wasn't available we had to compromise and use the tiger roar, hence we picked angry tiger productions. 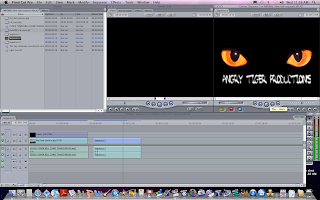 As we wanted a more professional look for the bigger film company, we wanted a smart business like word, some ideas included, professional films, industrial films, contemporary films, office blocks, but in the end we all chose and were happy with Imperial films. As we wanted a smart business like look, we wanted a picture of London buildings, then we thought of having Big Ben and the House of Parliament, as it is the most recognizable building in London. We decided a black and white drawing of the building would be more smart than a simple picture of the building. The sound we chose for this was a grandfather clock sounded like Big Ben.
Posted by Joe, Spencer, Hani and Peter at 03:52