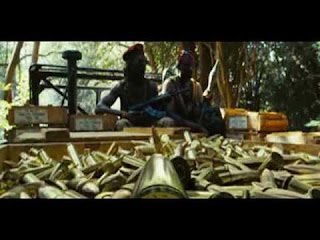 Lord of War (2005) is one of my personal favourite film openings. The whole sequence is following the 'life of a bullet. A complete POV shot from above the bullet. From the manufacturing of the bullet, through to the distribution of the bullet, then being loaded and evetually being fired into a young boy. This scene perfectly sets up the story of an arms dealer. It is a very iconic scene and portrtays many themes and facts about war. I also think it puts the rest of the film to shame. Another great factor of this opening sequence is the perfect use of the non-digetic soundtrack. Although 'For what its worth' by Buffalo Springfield is a song from the sixties it fits in perfectly with the 'behind the scenes' parts of war (the life of a bullet). This soundtrack is particularly good as it was a song fondly playing during the time of the Vietnam War making the audience possibly reminiss to those times of War, this may be a bit cliche but i think it works. It is a very dreary song for the best part and only nearing the end picks up and has a rocky vibe, this is much like the 'actual' life of a bullet; it starts off like any other, gets boxed up, but when it gets put in a gun it is a very dangerous object and the music reflects this. 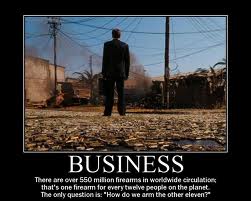 As i mentioned earlier the camera starts with a sweeping pan shot into a long line of metal which then gets stamped into a circular piece of metal ready to be made into a bullet (the manufacturing). This transforms the audience into feeling like bullets are just like an everyday object and are a part of life. In reality they are what is pulling the world apart. We are then sent down a escalator of bullets, just like a line of men signing up to go to war. The bullet then slide around and around in a cone until we land in a box, the same sort of thing happens with men being put into battalions in a war scenario. Next an interesting technique is used. We are shut inside a box and the screen goes black. This allows time for an elipsis and for the box of bullets to move off to war. Next we find ourselves being opened by a captain of some importance as we are being smuggled onto a large vessel, showing that it isnt just shady characters that dabble in these underground activities. After this we find ourselves being transported again via the use of blackness. During this blackness, it allows some of the names of the people involved in making the film. The blackness draws your attention to whoevers name appears. Again we are opened up to show a dramtic change in scenery, a technique used to show to the audience that bullets are a valuable camodity, however destructive; and are in use all over the world. 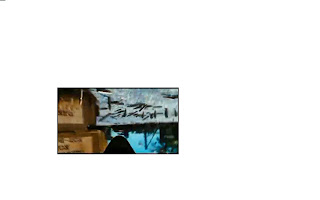 Next we are sent into a manic CG roll making the audience very dizzy indeed. This is unfortunately where the clip loses its sense of realism and is very clear to see that the bullet isnt actually on the ground. I dont think this effect was needed in the opening sequence, it Unfortunately just after this sequence of dizziness we are being loaded into the bullet's metaphorical coffin (a gun chamber). This traps the audience and makes them feel uncomfortable. We are then feeling an increasing level in tension as the other bullets are fired off to their deaths above. Finally we are looking down the barrel of a gun until we are fired through the warzone into a child, a tragic possibility of war. This also sets up major themes for the rest of the film and shows the darker side of arms dealing.

http://www.youtube.com/watch?v=VHn1zogeyO4&feature=related
Posted by Joe, Spencer, Hani and Peter at 06:45